So What's All the Fuss About Aboriginal Rights? 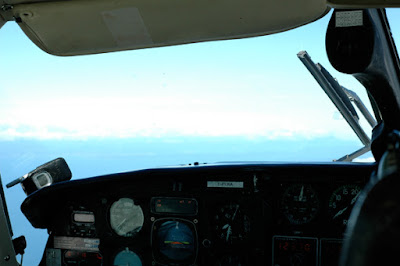 It's a rather small rectangular light on the cockpit instrument panel. It is, appropriately enough, red. But not all that impressive for the word emblazoned across it: "STALL." It's flashing right now, accompanied by an equally unimpressive, plaintive "baaa", "baaa", "baaa" sounding like a highly alarmed sheep of the highlands being chased by an overly-amorous Scot.

I'm in a twin-engine Piper Navajo Chieftain that I've chartered. It's just taken a hard left turn, and is attempting to drop from 5000 feet down to zero in too short a time. First time the pilot has been into this gravel strip. Seems he's waited a little too long to start his descent, but can't say I can blame him with all the natural obstacles that require dodging.

We've just shot up a fjord known as Rivers Inlet on British Columbia's central coast: beauty like the stuff of movies. Waterfalls propelled from sheer vertical mountainsides. Mountain goats like fleas picking their way across those same sheer faces. Invisible salmon below, deciding if it's time to make a run back up the home tributary. 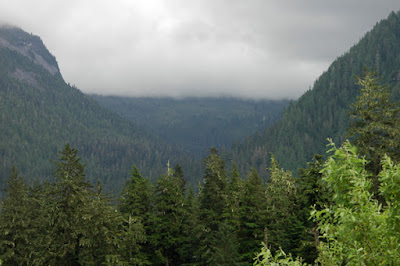 At the end of the fjord is a very short river - the Wannock - followed by the long narrow Owikeno Lake that's very similar to the fjord except for one being fresh water, the other salt. Fjord, river and lake are all compressed by vice-grip mountains running along their shores. The folks I've come to see live out their lives on a small amount of flat habitable land running along the shores of that short but important river, a river which historically had the third greatest salmon run on the west coast. They're the Wuikinuxv, and the Government of Canada has given me a mandate to settle their Aboriginal title claim with them. It's early 2004, and talks have already been proceeding sporadically for several years.

We kept the Wuikinuxv waiting a long time. Their then-Chief Joseph Chamberlain speaking through a translator told the Mckenna/McBride Commission (a government commission investigating the territory of Aboriginal reserves in British Columbia) way back on a Saturday afternoon on August 16th, 1913:

We want to get the whole of River's Inlet, from Koeye to the lake – Wuikinuxv Lake. The Whiteman wants to take all of our land and we are in the position of men who have been pushed half way to the water off our land, and it would not take much to push use off the land into the deep water altogether.

When a process was finally set up a mere eighty years later to deal with the Aboriginal title claims of the Wuikinuxv and numerous other Aboriginal peoples in British Columbia who had never signed treaties with the Crown, the Wuikinuxv laid claim to 6783 square kilometers – an area a bit smaller than Puerto Rico, and a bit bigger than Trinidad and Tobago. Almost no one else lived in this remote fly-in territory. Some loggers and commercial fishermen passed through now and then. But you don't need remote territory to have a claim; we also had groups in downtown Vancouver.

Aboriginal rights are nothing new in Canada. They existed in 1492, still continued in 1763, and even survived in 1982. Over this 500-year period, judges and legislators have shed a little light on what they're all about. And of course, Aboriginal peoples have had a thing or two to say about them as well. It's easiest to start not at the beginning (though for those who like to start stories there, I highly commend to you the great book 1491 by Charles C. Mann), but only around 30 years ago when s. 35 of the Constitution Act, 1982 codified what this Aboriginal rights thing was all about:

What this meant was that the government couldn't go around any more unilaterally extinguishing rights, that aboriginal rights could be separate from treaty rights, and that there are three kinds of Aboriginal peoples in Canada. 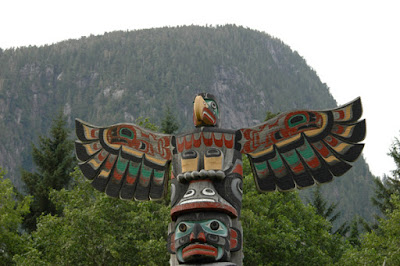 There's unfortunately lots of mythology which has developed around what those rights may or may not be. Mythology that hasn't helped the cause of Aboriginal-Crown relations in Canada. Perhaps the most key concept to remember is that they are collective rights exercisable by individuals; in a day and age of individualistic rights, this collective-rights concept might strike one as a little strange, but really it makes a lot of sense as it controls the historic continuity of who the rights used to belong to and who they have been passed down to.

It means that anyone with some Aboriginal ancestry - for which an awful lot of Canadians who have been here for a few generations might qualify  - can't simply walk out of their downtown Toronto condos and start exercising what they claim are their rights. But it also means that rights can continue collectively notwithstanding that those individuals who possessed rights at the time of first contact or treaty signing with Europeans aren't around anymore. It's not quite the same as non-Aboriginal property rights continuing after an individual passes on, but most seem to agree that individual inheritance is fair. So why not collective inheritance? I can tell you about those rights in future posts, but this is at least a start.

The wheels of the plane hit the gravel strip. We stop quickly; lots of runway left! No more flashing lights or alarms.

Unfolding ourselves from the narrow seats arrayed along the interior of the fuselage, we duck our heads as we exit the aircraft. We inhale moist temperate rainforest scents, and wonder if grizzlies have come down to the village to feed on the plentiful berries. The Wuikinuxv are waiting for us with a van to drive to the village to start our negotiations. 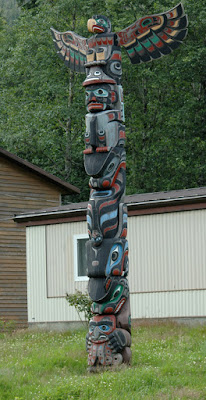 Posted by Gordon Scott Campbell at 8:32 AM